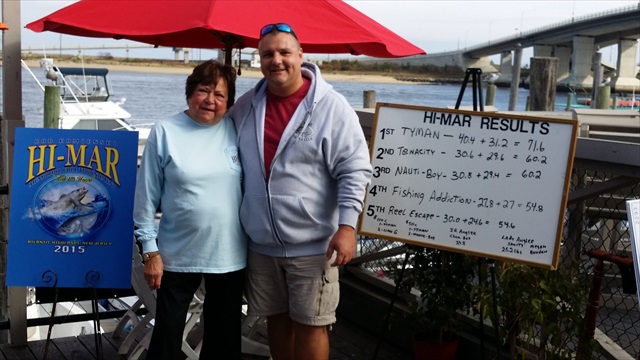 Chuck Many of Annandale won the Bob Kamienski Memorial Hi-Mar 40-hour Fall Striped Bass Tournament with his Ty Man out of Gateway Marina in Highlands — for the sixth time. With a crew consisting of Matt Calabria of Hazlet, Dave Donahue from Readington, Nellie Greer of Bethlehem, Pa., and Al Ristori.  Many started out Friday night and Saturday morning in the Hudson and East rivers.

Calabria broke out of the mold of stripers below 20 pounds with one of about 30 pounds on Many’s IGFA-Certified Boga Grip, and then Donahue shocked everyone aboard with a 40-pounder. Those bass went into the huge below-decks fish well of Many’s True World, in which they could swim in circulating water. When we weighed in at noon Sunday, the Boga Grip proved to be right on the mark as the two bass weighed a total of 71.6 pounds to win the contest by over 10 pounds while Donahue ran away with the largest bass prize. After weighing, both bass were released at the dock — literally tearing out of Many’s hands.

Tenacity was the early leader in the 29-boat contest with a two bass total of 60.2 pounds, which stood up to put Charlie Radcliffe in second however there ended up being a tie for second with Al Dudas on Nauti-Boy. Gary Carr’s Fishing Addiction took fourth with 54.7 pounds and Reel Escape took fifth for Joe Tuccio at 54.6 pounds. Wave Dancer recorded 16 tagged and released bass in addition to those weighed. Many boaters reported catching lots of teen-sized stripers.  The contest concluded Sunday afternoon with the presentation of awards at Bahrs Landing in Highlands, where Pat Kamienski passed out the awards for her husband’s memorial tournament and the food was up to the high standards of Bahrs Restaurant.