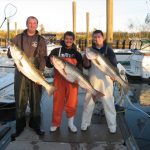 Tom Novak of Green Brook ran east to Jones Inlet with his S.T.Barb to defend his championship in the Hi-Mar Striper Club’s Fall Striped Bass Tournament out of Bahrs Landing in Highlands as his crew of Jake Campi and Quinn Bolivar trolled Tony Maja bunker spoons for bass of 28.6 and 22.8 pounds– a winning two-fish total of 51.4 pounds.

They edged out Al Dudas of Cliffwood on Nauti Boy who had the biggest bass of the contest, a 31.8-pounder off Staten Island — but could only match it with a 17.4-pounder for 49.2 pounds. Gregg and Ryan Taffet of Tinton Falls also ran to Jones Inlet for stripers of 25 and 20.6 pounds to take third at 45.6 pounds on Feeling Crabby.  Casey Campi of Little Silver boated bass of 22.6 and 20.4 pounds on Maktac for a 43-pound total and fourth place. Fifth went to Gary Carr of Hazlet on All In after he fished Shrewsbury River for bass of 20 and 17.6 pounds totaling 37.6 pounds.

The bonus cash awards for largest bass on Julian’s Montauk bunker spoons went to Feeling Crabby  and Maktac — which also had the Lady Angler award for Irene  Block with a  22.6-pounder.

Steve Webber didn’t win anything on his Reel Lucky, but had the most unusual catch as Jeff Sutton released an estimated 80-pound black drum that hit a trolled shad rig and ran off 300 feet of wire plus almost 300 yards of mono backing.