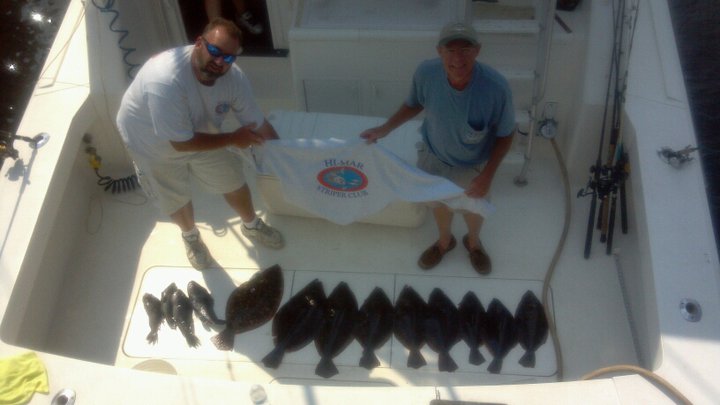 As you probably have heard by now, Team MAKTAC took top honors at the first annual HI-Mar Family Tournament.  The members present on the boat were myself and Mike McClean.  The boat was captained by Tony Campi, and we were joined by Jake Campi, Stephanie Balletta (my future daughter in law) and Mike’s daughter Liz.
After a slow start in the bay, we made the run outside and found some big fish throughout the day.  We all fished hard, both with bait and bucktails, but we laughed even harder, which made it a great day. The picnic afterwards was great, we enjoyed burgers and dogs and Baker’s Scallops.  The people that showed up and helped put this all together deserve a big round of applause, especially those that brought homemade salads and desserts.
One of the best parts of the day was sitting around and just swapping stories, enjoying each others company.  It reminded me of the tv show, After the Catch, where they get the capt.s from Deadliest Catch and have them sit around a bar and get interviewed.  I think this would make for a great presentation at one of our meetings, with some of the more seasoned guys telling stories about “the good old days”…how ’bout it Gene?
One other prize was won, although it was a consolation prize.  Liz McClean won a coveted Teacher’s Pet T-shirt for her picture of the sea robin she caught.  Due to not understanding the rules, we released the robin after the picture was taken, not realizing we had to bring it to Baker’s for the release.
All in all, it was another great event held by our club.