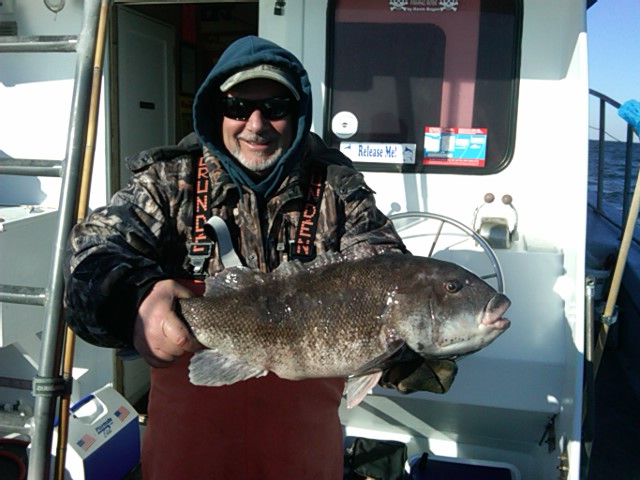 13 members fished on Sunday December 18th with the Skylarker out of Belmar. Capt Steve Spinelli put us on the spot and it was one stop shopping all day long. Very good blackfishing all day long with a stiff wind and some chilly conditions hovering around the freezing mark. White Leggers were the bait of choice today.

The pool which was contested throughout the day eventually went to Barry Heffernan who pulled a 10 lb 10 oz slob out near the end of the trip.

Joe Tomaszewski had a double limit+ up to 8lb 10 oz (released) plus seven throwbacks.

Greg Vongas had a nice catch to 7 lb 8 oz

Billy Rowan (Billy The Kid) also had a double limit to 9lbs.

It was alot of fun and jokes going all around. The highlight of the day went to Billy Rowan who while trying to swing a ligit 10 pounder and had the line snap and rod smack him between the eyes.

Thanks You Billy Rowan for organizing