Behany wins Angler of the Year at Hi-Mar Awards Dinner 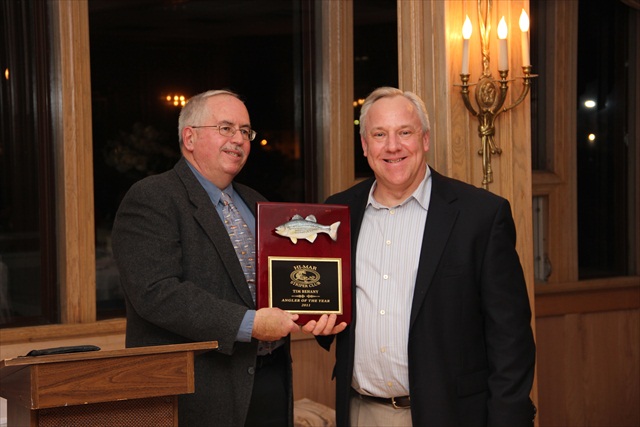 Tim Behany won the Angler of the Year placque at Sunday’s Hi-Mar Striper Club Awards Dinner held in the Channel Club at Monmouth Beach. That award is based on points derived from weigh-ins of the species eligible, and Behany managed to win three of them with a 27.17-pound striper, an 11.8-pound bluefish, and a 1.67-pound winter flounder. Greg Vongas had the largest fluke at 9.01 pounds; Jim Curcio led in blackfish with an 8-pounder; Andy Knouse  weighed a 5.2-pound sea bass; and Joe Tomaszewski boated a 23-pound cod.  Stephen Machalaba recorded the largest tagged and released striper with a 44-incher, while Alan Beneroff once again claimed honors for the most tagged and released stripers.

A good crowd turned out to enjoy an outstanding buffet dinner at the beautiful facility overlooking Shrewsbury River. Bruce Smith, of the JCAA, won the most unique door prize — a grapple anchor hand-crafted and rigged with chain by Gene Graman, the dinner organizer who runs his That’s It out of Twin Lights Marina in Highlands